When I started my Gamertag on XBL there was one name I wanted. Patton. Since the first time I logged onto the internet, my moniker was Patton, after Mike Patton. However, that wasn't available. While I was thinking of an alternative, I started to think of my grandmother. Whenever we'd go visit my grandparents, they'd always start up a game of Pinochle with my mother and uncle. That name always stuck with me. It sounded so strange and the spelling was weird. Anyways, the correct spelling wasn't available and I made the mistake of spelling it the way I did. Obviously, I have terrible aim and get urine on my hands whenever I use the bathroom. At least, that's what the young people on the internet tell me when they see my name. 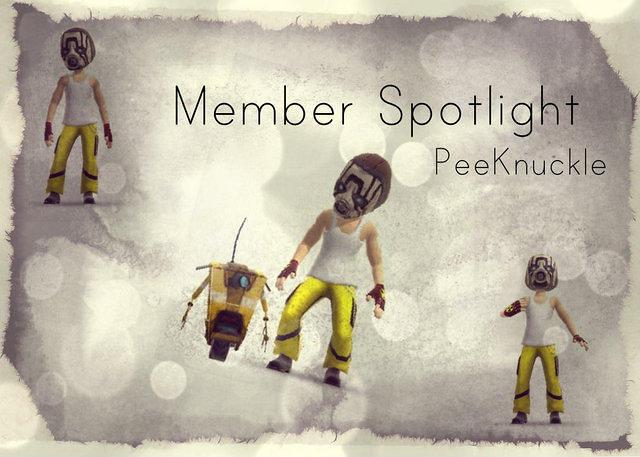 I was playing Borderlands 2 like a mad man. However, Gearbox decided they were going to dictate how their fans should play their games. They lost sight of what's fun, and steered the franchise into a seemingly MMO direction. Balancing their non-competitive game, and directing them on the 'correct' ways to farm. I still have some love for them, but I think it's out of the slim chance that they'll realize their mistakes and rectify them. Wake up GB! It's not too late.

Grand Theft Auto Cinco! Ohmahgerduguise! It's been entirely too long since there was an open world, free roam style game. It's exactly what this community needs. People get older and naturally drift apart, but there is a big handful of us that have been close friends for near seven years. It tears me up that we got this far, and now we decide to let life interfere. It's hard as hell finding good friends that you not only trust, but look forward to seeing on an almost daily basis. That's my GC family. I love you guys and girls. Sock life in the grill and come back to PK!

Philanthropist. Having an impact on people's lives in such a positive way has to feel good. I like feeling good and I like to see people smiling and laughing. It also assumes I'm already super wealthy, so all the work is already out of the way. Work sucks the life from you if you're not enjoying something along the way.

People who can't STFU, and feel the need to constantly talk. I don't know if it's a condition of mine or what, but when someone drones on and on, it all bleeds into one sound and it aggravates the hell out of me.

Reading a book, surfing the internet, cycling, dead weights, spending time with my pup, Jasmine or talking to my friends who use Gamercide's mumble server.

Imagine that you live on a farm raising turkeys. A local bigwig chooses one of your turkeys for Thanksgiving dinner. You go to collect the turkey and turkey takes off running. You back him into a corner and he pulls a knife on you and says, "You touch my giblets, I will cut you". What do you do?

I immediately become his agent. A talking turkey? Holy shit! I'd be rich. Imagine all the endorsement deals. You'd see Angry Turkey all over. He'd have commercials, his own TV show and at least 2 movie deals. I'd probably kick his ass, too, for pulling a knife on me, because screw that turkey.

You are writing a novel about a love story gone wrong. Billy caught his wife Suzy in bed with his brother. Billy is now planning on cutting off his brother's peepee and stuffing it down his wife's throat while she sleeps as revenge You want to get publishers to take interest in it, so you have to write up a description of the novel in 10 words. What do you write?