Developed by: 4A Games

Prior to the release of Metro 2033 way back in March of 2010 I hadn’t heard much of the game, never read or knew of author Dmitry Glukhovsky’s novels bearing the same name, and despite these things I fell in love with the dark and depressing post-apocalyptic setting presented by Ukrainian based developer 4A Games. I can find flaws in just about any game I play, Metro 2033 itself also not excused, but the presentation of the game and the world that I was thrust into more than made up for my small criticisms at the time. When Gamercide was offered an opportunity to check out the newly released Metro: Last Light I immediately jumped at the chance to once again to don my gas mask and explore the incredibly detailed desolate landscapes. 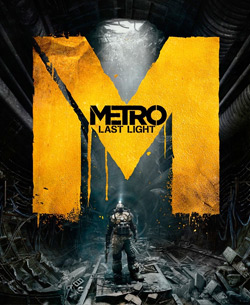 This game has some amazing vistas!

Metro’s story isn’t an entirely a new concept. Nuclear destruction wipes out society; society crumbles on itself and retreats underground to survive. Throw in a dash of mutants, terrifying and telepathic monsters known as the “Dark Ones”, set the stage in Russia with an economy based on trading military grade bullets and you pretty much get the point. Once again you’ll be filling the shoes of the previous protagonist, Artyom, although the storyline seems more focused on the inner turmoil and conflicts between various factions surviving underground as they look to control the weapons discovered within the military vaults of D6 rather than the perceived menace of the Dark Ones showcased in the prior game (Last Light assumes players experienced the “bad ending” of launching missiles to destroy them in Metro 2033).

Last Light is incredibly beautiful. I’m not kidding you on this. Despite the slightly linear experience of the game I spent a great deal of time slowly roaming through the corridors and tunnels marveling at the attention to detail. In my eyes not many games create such an eye-catching atmosphere which sucks me in and really makes the surrounding environment feel alive. In a completely aesthetic point of view Last Light is breathtaking. Despite the linear storyline, the "towns" of people feel alive

The PC master race used to joke about their rigs, often querying one another “Yes, but can it run Crysis?” The benchmarks previously set have been absolutely shattered by 4A games with their self-titled 4A Engine, and that’s not an understatement considering the optimum system requirements calling for GeForce Titan (which also currently has an equally titanic price!). Even ported over to console it’s amazing to consider how much can be squeezed onto an Xbox 360 or PS3 disc while still looking this incredible. Gamercide was provided a review copy for the PC and I can tell you that my now aging MSI GeForce 460GTX wept silently in a corner while running the game, although I most likely shouldn’t use the term silently considering the card’s cooling fan usually was running full tilt under the stress placed upon it. That’s not to say I had to turn the resolution extremely low with all the fancy effects like tessellation and PhysX off, but this is definitely not a title you can expect to crank everything to max and expect a reasonable frame rate. Last Light is also optimized really for Nvidia cards (AMD cards lack PhysX support).

Although I played through the game on an easier setting (don’t judge me, I’m a horrible shot and needed all the ammo I could lay my hands on!) the AI from what I experience left a little to be desired. I understand stealth mechanics and remaining “hidden” when obscured from sources of light, but human enemies can almost be completely walked right up to and around. One would imagine that in low light situations you’d be able to detect someone who is literally a few feet away from you, but for some reason just about every single human enemy is in some serious need of corrective eyewear.

I encountered some other minor gripes within the game as well. I’m not sure if it’s a product of PhysX, but while watching an entertaining performance within the theatre I couldn’t help but notice the “assets” of the female dancing line which seemed to behave in a gravity defying display of awkwardness. Additionally, just as I noted in Metro 2033, it seems that copies of Glukhovsky’s novels are scattered everywhere. In the first chapter of the game alone I found three of them and I found myself checking around in every living area to see how many more existed (there are a lot of them). It’s prominently noted during the opening splash screen that the game is based upon a novel, so why do these survivors of an apocalypse have the actual books everywhere? Would that make everyone in the game a prophet of things to come since they’ve already read what is going to happen to them? Why does everyone have a copy of the book?

The game only hard crashed on me once forcing a restart from a previous checkpoint, but for a PC game in 2013 to have only one save game file is slightly unacceptable and I’ll tell you why. Partway through the game when I reached the aforementioned theatre the game saved a checkpoint. It’s a small area where the checkpoint saves for you in a hallway right outside of a tavern area. I walked into the tavern and discovered a non-responsive NPC that was standing with his back turned to me, frozen in time and halting my progress. A wandering ticket seller following his programmed path even kept walking back and forth straight through this mystery man barring my way forth. There was absolutely nothing I could do at this point as reloading the checkpoint threw me back into the hall only to discover the person still blocking further progress. I even reloaded and completed the previous whole chapter twice and encountered the same problem. On a third try I did find a small area I missed that had an “event” where I picked up a shotgun and was suddenly attacked by an enemy. When I reached the tavern that third time our friendly human barricade had completely disappeared as if he didn’t even exist in the first place. This was after over five hours of experimentation trying to discover a solution. I’m unsure if the scripted event had any effect on this or not, but having to replay whole chapters due to issues like this is frustrating. Despite any issues, Last Light is engrossing and a joy to play. If you have a powerful PC and want to experience truly cutting edge graphics I recommend checking it out. Even if you’re unsure your PC can handle the crushing system requirements you’d be perfectly fine with a console port on the Xbox 360 or PS3 and could probably still say it’s the best looking game out at the moment for either system. Nuclear disaster has never looked better!