Sengoku, a grand strategy game based on the “Sengoku Jidai” or “Warring-States” period of Japanese history will be released by Paradox Interactive on September 13th this year. This first look is based of a preview copy of the game, and so will not fully reflect the final copy. During my preview session with Sengoku, I was given the chase to play through some some campaigns as various clans. This preview will detail my experience with one of them.

When you first go into single player, you are greeted with a nice view of the entirety of Japan, along with the various historical starting periods and a panel for info on your chosen group. The map really looks great in full 3D. Rolling hills, rivers, trees and settlements (such as castles, watch towers) litter the landscape and make this Japan a treat to play in. Players are able to zoom in close, or watch from a preferred distance. The camera tilts slightly when zoomed all the way in, and this makes the 3D features more prominent.

From this screen we can pick different map modes. These also help choose our character that we will play as. Clan Mode lets us play as a clan leader, controlling larger land masses and having to contend with other, smaller characters in the clan. Daimyo Mode lets us see and choose to play as the leaders of what are best described as states within the clan. These characters control smaller amounts of land, and are under the control of the clan leader. Character mode lets us choose to play as much smaller areas within these states, like local districts. 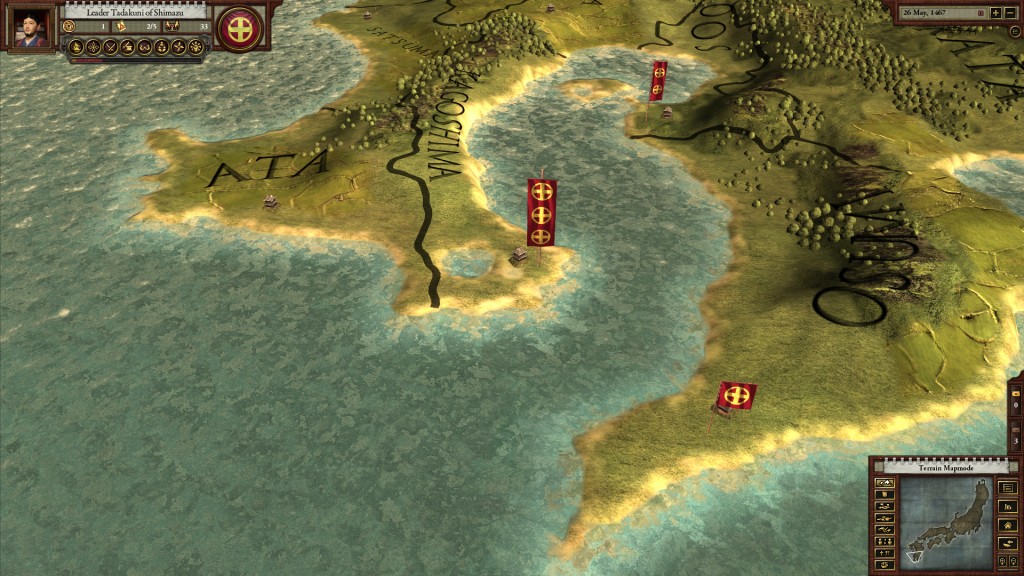 Zoomed in view of the water, and the variation in land height.

While it may seem that playing as the clan leader is the best choice, there is actually a lot more to worry about. Revolts, Daimyos wanting to separate from your leadership and the general struggle of power make things difficult.

For the purposes of this preview, let’s choose Hosokawa, the easiest clan. We start of at war with many clans, which can make things difficult. It is best to make peace with at least some of them. When opening up the diplomacy menu, it becomes evident that Sengoku has a very good looking interface. The gold, maroon and parchment themed menus are very easy on the eye. With a game so centered around the use of the interface, this can only be a good thing. In this preview it was found that all of the warring nations would accept white peace. Keep in mind this is a preview copy, and balancing issues may still be around.

By raising my levies from each province, I was able to create a sizable army. This is a gamble, as, if not raised, a levy will help defend it’s home province in the event of a siege. When the war is over, it is easy to return them all home. I moved my army to the border of one of the clans I was still at war with, the Hatakeyama clan. They are at war with multiple neighbours, so their power is split. It is easy to March into their lands, and begin seizing their settlements. The counters for armies look good as well, especially from a strategic distance. 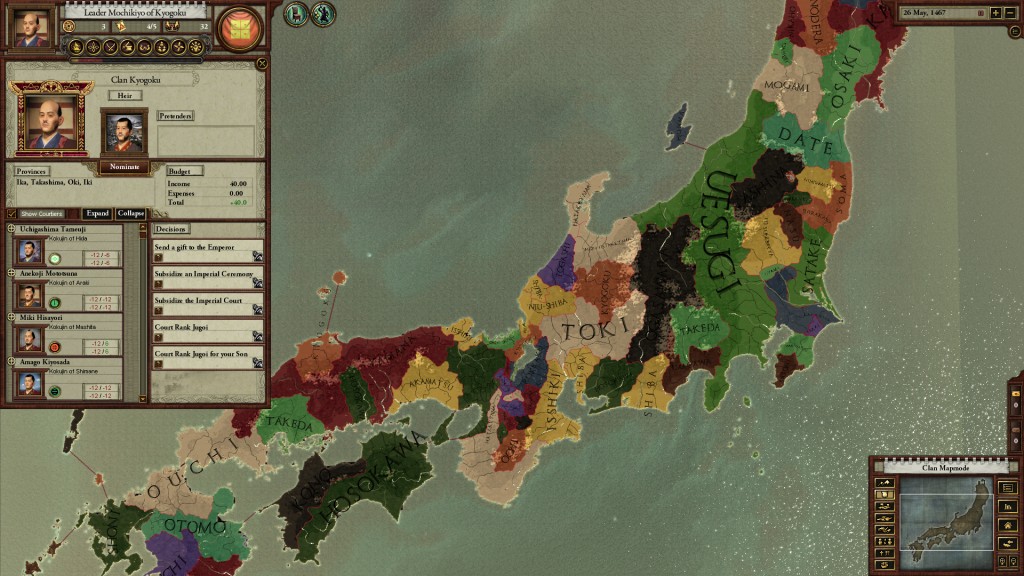 Part of Japan showing various Clans, and part of the interface.

After fighting off their attempts at resistance, we now control their entire country, aside from a few provinces seized by their rival neighbours. The population of our home provinces are getting rowdy - in all this excitement they have been forgotten. The men of the court, hired to control specific areas of business (Diplomacy, War, Intrigue) Can be used to deal with this by reducing revolt risk, building castles or buildings and improving relations with a province leader, among other things.

What comes next is up to you. Will you make the Hatakeyama your vassal, or annex them into your clan completely? Will you start a plot against a powerful rival, recruiting other clans to join you when you carry out the attack? Or will you build up your economy and become a power house, while you are at peace? The possibilities seem almost endless in this promising grand strategy title.