Well I use to be Dr. Japolty, which was a name I used when prank calling people. I used it for my gamer tag but everyone made fun of me because I spelled chipotle wrong. So I switched it to Slapajap, after a few weeks everyone was calling me a racist, even though I didn't mean Japanese, so I was listening to a song by Three Six Mafia, and I heard the word green grenades, thought it sounded good and used it. 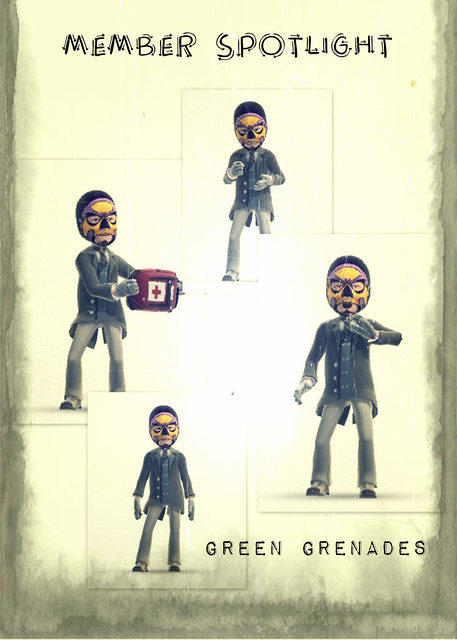 Nothing specific really, I suppose Crysis 2 will be next in line since I just got it on sale, and it shouldn't take long to beat.

Grand Theft Auto 5 is probably the main one. I have to have that game. I would literally invade a foreign country just so that game would release early.

I suppose the only two jobs that interest me are radio talk show host or a professional wrestler. Although most radio host make horrible money. Ever since I was a kid I wanted to be a wrestler, however I'm only 5'6 160 and the ones who make it big are 6'4 250+. I wish I could just win the lottery, keep my job for the insurance, and travel the world.

Well I don't usually play with strangers, so the whole trash talking usually isn't an issue, but the one thing that does bug me while playing with friends is when we try to organize something and people want to goof off. We will all be lined up or preparing to do something and someone will shoot someone, or start a fight because they think it will be cute or funny, when they can just stand there and be patient until our organized gameplay is over then start goofing off.

When I'm not gaming, I'm probably working or sleeping. That is a usual day but I like watching television series, and movies, so I usually wind down by watching a good show or movie. I read quite a lot at work since there is a lot of down time and I usually enjoy mysteries. I just bought a house a couple months ago and I found out I enjoy doing yard work, so I'm usually out in the yard doing something during the day. I just bought a new bike for exercise so maybe I'll get into that too.

If Jason Statham was standing right in front of you what would do?

I would like to say I'd just shake his hand and get an autograph but that wouldn't happen. I would have to fight him. He is the greatest warrior in history. Statham is the only person worthy to fight me. So if I were to die by his hands I would be happy and I would like to think he would feel the same. They would have to evacuate a large radius though so there aren't any casualties. There would also be a long dramatic dialogue between us before the battle, we finally found our equals. It would be glorious.

If you have a super power: a) how did you get it

what exactly is it c) what do you use your powers for, good, evil, or something in between?

I'd have to say teleportation. I would like to think it would be like the story line in heroes where everyone has the ability to have super powers, but they inject the person with shot to bring the powers out. So I'd like to think I got it from a mad scientist some how but the serum is destroyed. I would first rob many banks and stash my money somewhere. I would buy me a kick ass house somewhere in the country, by a kick ass outfit, something full bullet proof, then I would use my powers for good. I would use it to hunt down terrorist and bad guys. Until I met jason statham of course and we would do battle, and I would be labeled a villain, because I would be the hero the world deserves, I wouldn't be the hero the world needs right now, because I'm not a hero, I'm don knotts bitch, the grumpy protector, i'm green grenades.