Well, back in the day when I was a wee lad, I used to go by xStArDoMx. Can you just feel the teenaged angst? The story behind it isn't very remarkable. I went through some old gamertags for clans with lots of x's and alternating caps back when I used to play Halo 2 on the OBox. Once I got a 360, I decided I needed something better. I originally just wanted Stardom but, alas, it was taken. So I used my awesome workaround skills and came up with xStArDoMx. I've since moved on to bigger and better names such as Nick. Other aliases I go by are FeversMirrors (based off of an album by Bright Eyes) and Taters (my Steam name if I remember correctly!). 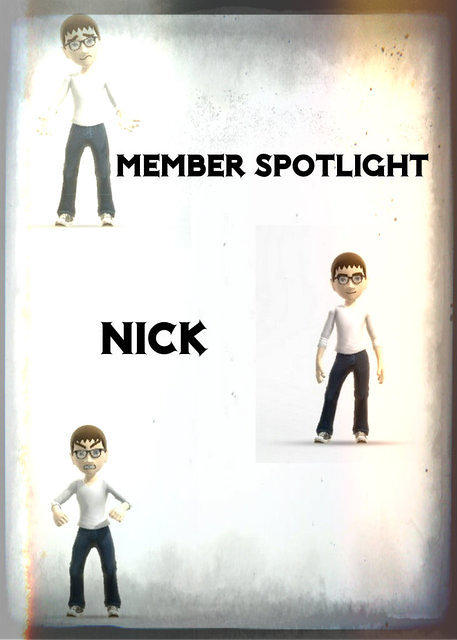 My gaming selection has been pretty limited for the past few years. I'm a rampant (read:addicted) League of Legends player as of right now. It's a MOBA clone of the original DotA from Warcraft 3. Little fun fact, it just became the most popular PC game in the world! Take that WoW players!

Besides that, I basically just buy a few games here and there that look interesting. As of recent, I've played some I Am Alive, Bastion, Sleeping Dogs (surprisingly awesome), and have just started Alan Wake.

I'd say the top 3 games I'm looking forward to most are the new Assasin's Creed game, BioShock Infinite, the standalone Day Z game. They all look amazing.

If I could be anything, I'd want to be a teacher. There's just something about spreading knowledge to people that really makes it surpass any other thing I would want to be. Well, besides a billionaire with no job, maybe. That would be pretty cool.

I just hate it when people AFK in a game. Why would you start a game of something, especially a team game, and then leave? It's infinitely frustrating and it really starts to get to me after a while.

Over the past few months, it's really only been working. I like to spend my weekends out with friends. Everyone is hitting that 21 year mark so things are good!

I also spend a lot of time browsing reddit and have recently gotten back into a reading habit (thanks Avahra!). Currently about halfway through House of Leaves.

You are carving a pumpkin. You finish the pumpkin by carving the mouth. As you are admiring your carving skills, the pumpkin starts to talk to you. What do you two talk about?

We would definitely get into some deep philosophical conversation about life and death. I mean (s)he would only have a few weeks of life before they start to rot and widdle away. I may as well discuss some existential options to 'em!

Definitely a sexy nurse costume. My girlish figure could pull that off perfectly. I just need boobs.